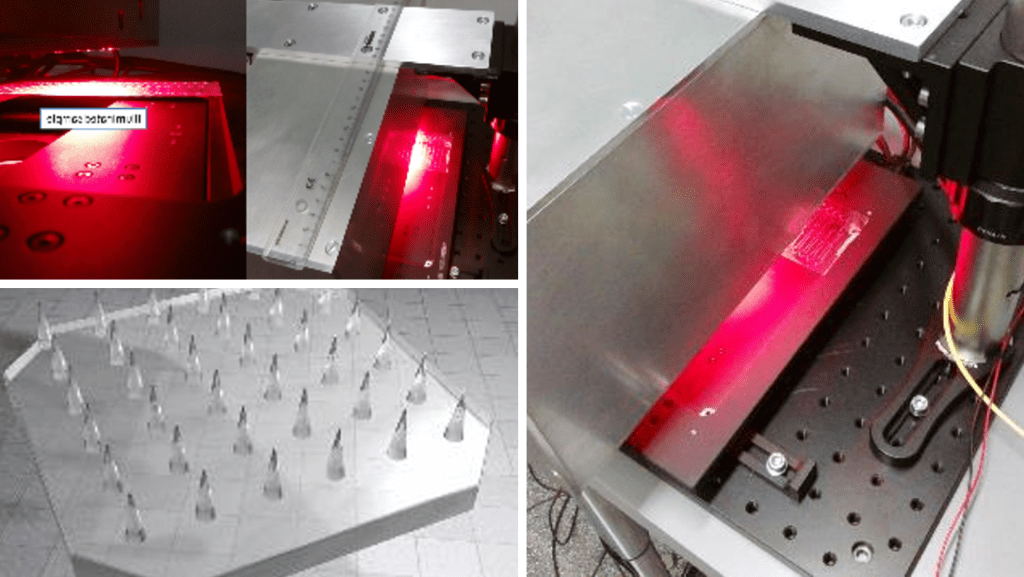 FASTTEST is a new metrology system for non-contact 3D inspection of micro-fluidic chips and other micro-featured components. FASTTEST offers a faster feedback on drifts in the manufacturing process to the manufacturer. In consequence, it allows faster intervention and therefore reducing waste by allowing alteration of the process before the products drift out of specifications. This benefits FASTTEST customers to save resources and be more efficient.

ASE Optics is very active in R&D activities. Since its foundation, we have been participating in different European and national R&D calls, such as H2020. One of the first projects in which we participated was FaBiMed (7th Work Programm), were we were the leaders of the work package focused in the quality control and optical inspection. The knowledge and tecnology adquired and developed during this project was the starting point of FASTTEST, from technical point of view.

The other factor that made us to start this new development was the feedback received from the market: nowadays, microfeatures production industry is growing, specially in the medicla and biotechnology field. Day by day, year by year, new different micro-devices appear: microfluidics, microneedles, micropipettes… and the manufacturers need the best quality and inspection systems to ensure the quality compliance of their products.

FASTTEST system performs mechanical quantitative Quality Assessment on micromachined parts at assembly chains, assessing the quality of the manufacturing process (conformance with the mechanical specifications). The parts being evaluated with FASTTEST have a dimension of a few mm in x-y and only a couple of mm in depth. The precision of the measurements is in the order of a few µm.

In the figure below, we present the scheme of the FASTTEST system as seen from software architecture. In gray are depicted the hardware parts of the system: in blue the sections of the code; in red are the communication channels and the data buffers.

The interpreter stages in the GUI are used to translate the commands and the data to/from the assembly chain, the external data files, the GUI itself and the functional kernel.

Benefits – What you get using FASTTEST

The system allows a preselection of the inspection zones of interest. This together with a well optimized data acquisition rate, allows the inspection of parts at rates matching production rates, enabling systematic inspection of the entire output of the production line rather than randomly selected samples. This thorough quality control reduces waste and increases quality in sectors such as point of care medicine where disposable microfluidics are used.

The beginning of the project

The work from the beginning of the FASTTEST development project has been focused on software integration and optimisation of the different assemblies making up the FASTTEST instrument. The OCT measurement and the FFT leading to depth measurements has been performed and calibrated. The data acquisition speed of the OCT is now hardware limited to 40 000 depth profiles per second. A user interface now allows the user to select the path which the OCT is to scan.

The system is able to self-configure and perform measurement operations following an inspection path introduced by the user. The machine vision is able to recognize patterns which will be used to automatically guide the OCT beam to the regions of interest. FASTTEST has been demonstrated to potential customers and discussions are currently on-going with a medical devices manufacturer about applying the system capacity to a particular QA problem they have been unable to resolve before. The tailoring of the software by the IA to specific potential customer needs has increased the customer base for the FASTTEST system.

In the above picture, we can see a 3D map of the portion of a syringe needle. The inspection area was selected through the software, that reconstructed the depth map in false colours (every colour corresponds to a depth value, according to the colour scale reported on the right of the image. Through FASTTEST, customers can program the inspection path relevant for the Quality Assessment of the parts they manufacture, saving time and enhancing their reliability.

FASTTEST is fully autonomous system and, as such, is provided with an extensive set og automated diagnostic tools for reliable hardware control.  Thought FASTTEST, customers can program the inspection path relevant for the Quality Assessment of the parts they manufacture, saving time and enhancing their reliability.

Since the beginning of the project, in ASE we reached significant improvements in the FASTTEST instrument, placing it beyond the current SoTA for micrometric non-contact inspection technology. The measurement rates achieved in 3D together with the measurement philosophy which drastically reduces the data load allows for an instrument which can match production rates. A feat not achieved before. This results in a faster feedback on drifts in the manufacturing process to the manufacturer, allowing for faster intervention and therefore reducing waste by allowing alteration of the process before the products drift out of specifications. This allows FASTTEST customers to save resources and be more efficient. The end-users also benefit from FASTTEST, have higher quality assurance of the products they are purchasing. The main market for micro-devices currently targeted being disposable point-of-care medical devices, the long-term impact of FASTTEST is improved treatment and ultimately health for Europe and its citizens.

This website uses cookies to improve your experience while you navigate through the website. Out of these cookies, the cookies that are categorized as necessary are stored on your browser as they are essential for the working of basic functionalities of the website. We also use third-party cookies that help us analyze and understand how you use this website. These cookies will be stored in your browser only with your consent. You also have the option to opt-out of these cookies. But opting out of some of these cookies may have an effect on your browsing experience.
Necessary Siempre activado
Necessary cookies are absolutely essential for the website to function properly. This category only includes cookies that ensures basic functionalities and security features of the website. These cookies do not store any personal information.
Analytics
Any cookies that may not be particularly necessary for the website to function and is used specifically to collect user personal data via analytics, ads, other embedded contents are termed as non-necessary cookies. It is mandatory to procure user consent prior to running these cookies on your website.
GUARDAR Y ACEPTAR